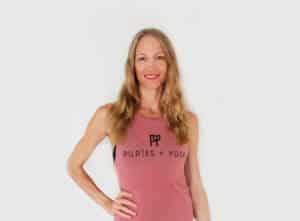 An 18-year Las Vegas resident originally hailing from Toronto, Canada, Smithy discovered yoga late in her professional dance career when she realized her love of the stage was doing harm to her body.

What originally started as a method to strengthen and maintain her body, and hopefully reverse some of the damage dancing had done, the practice of yoga became a true love.

When offered the chance to attend yoga teacher training, Smithy leapt in feet first. It was then that she realized there was so much more to yoga than she had ever thought. She felt she had been called on to pass along the beautiful world of yoga to any and all that she could.

Smithy teaches yoga because she strongly believes that every single human needs yoga, and she wants yoga classes to be as much a part of everyone’s day as going to school or to work.